You will find below an article in original version which was realized by iheartradio on the young people of the association who carried out a ceremony in Montreal (Canada, Quebec) on Tuesday, July 30th, 2019 at the Régiment de Maisonneuve. 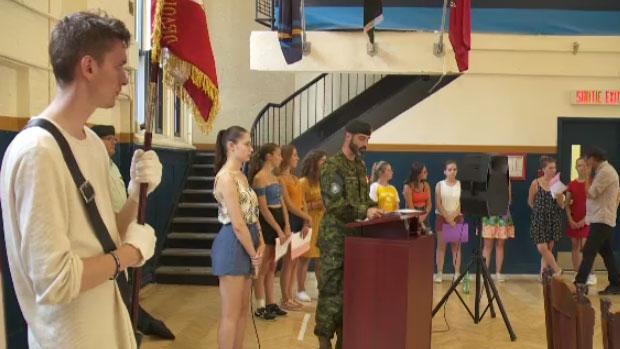 A group of French  students are in Montreal to honour World War II soldiers who died in the liberation of France.

“Canadian soldiers came to Normandy,” said student Philippe Bosquain. “Since they liberated us and gave us our freedom I think it’s my duty to come to their country to say thanks to them and remember them.”

Bosquain said he was told stories about the liberation by his grandfather, who was four-years-old on D-Day. Those stories left him with an enduring respect for Canada and its veterans.

“They mean a lot to us back in France. They are our heroes,” he said.

The group of students are touring different areas of French-speaking Canada. They’ve encountered the families of World War II veterans as well as active-duty soldiers. They have also held ceremonies, including one at the Cathcart Armoury on Tuesday, where the names of soldiers who died in the liberation of France are read out. It’s part of a trip that is held every four years.

“They are really grateful about what we do. We are a big ray of hope because we will carry the torch of remembrance,” said Bosquain.

The group's trip ends at the Citadelle in Quebec City on August 4.